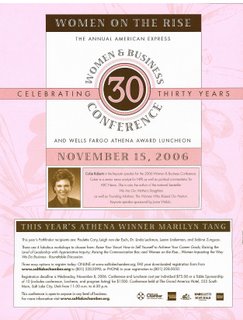 Imagine an existing event with a successful 30-year history aimed at women in business. Imagine a well-known celebrity pundit and mother as the keynote.

Now imagine a nice cause ‘overlay,’ as we used to call it at Children’s Miracle Network: maybe a donation is made to a local kids cause with every early registration. Maybe there’s a silent auction at the event benefiting single moms in poverty. Maybe there’s an incentive for bringing usable professional women’s clothes that would go to Dress for Success. Or maybe there’s a breakout session that explains to attendees how to add the power of cause-related marketing to their companies or businesses. (All modesty aside, yours truly could help with that).

Well in this ad for the Annual Women & Business Conference and award luncheon you’re going to have use your imagination, because neither the sponsors… American Express, Wells Fargo, the Salt Lake Chamber, and others… nor the organizers included a cause-related marketing overlay.

That’s a pity. In both qualitative and quantitative studies, women make it abundantly clear that they are motivated to make the world a better place. Viktor Frankl says we all search for meaning in life. But I would argue that women feel that longing more acutely than men. Marketing studies certainly show that women are more responsive to cause-related marketing than are men.

The conference obviously has staying power, but a cause overlay… done well… would really help bind the attendees emotionally to the sponsors and to the event.

For instance, I can imagine brief testimonials from one or more women who had benefited from past Dress for Success clothing drives and now, some time later, are in the workforce, in part because of the confidence professional clothing gave them going into interviews.

The ad, which appeared in the October 2006 issue of Utah Business Magazine, is fine as far as it goes. It just could have gone a lot farther.

Anonymous said…
That's a bit disappointing the sponsors didn't put out any marketing overlay at the women business conference
11/27/2008 10:30 PM