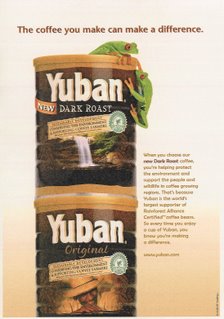 Certification Exhaustion
A few years back a would-be client came to me with an interesting question: would people in the first world support cause-related marketing that served people in the Third World?

In their case, they were building children’s hospitals in Africa, Asia and Latin America. That sounds like a mountainous undertaking, but the fact is, you can build and equip a pretty darn good children’s hospital in Uganda, India or El Salvador for pennies compared to what it would cost in North America or Europe.

I didn’t have a ready answer for these folks, but I told them there were two ways to test the idea. Either they could commission a rock-solid probabilistic conjoint survey for $25,000 más o menos, or they could hire me to build them a campaign for the same amount of money and we’d test it in the marketplace.

I’m still not sure of the answer, but increasingly it seems that companies are willing to test in the marketplace the idea of cause-related marketing in the First World to the direct benefit of the Third World.
In this ad that ran in Parade Magazine on Nov. 5, 2006 Yuban is promoting a blend of coffee certified by the Rainforest Alliance, a New York City-based nonprofit whose mission is to “to protect ecosystems and the people and wildlife that depend on them by transforming land-use practices, business practices and consumer behavior.” You gotta admire that kind of ambition from an outfit with a $12 million budget.

The Rainforest Alliance criterion for sustainable agriculture runs to 41 pages. They have additional criterion for bananas, citrus, coffee, cocoa, pineapple, and flowers & foliage. The coffee addendum is an additional eight pages and covers things like the minimum number of native species of trees required per hectare, shade density, irrigation canals, slope, fertilizer, child labor (which is allowed only if they don’t have school obligations and they must be paid in cash), native habitat remediation, etc.

This is tricky stuff because there’s a natural tendency to want to try and include everything.

I have some personal experience with nonprofit certification. While I was at Operation Kids I created the criteria to be an “OK Charity.” After a lot of hard-chair thinking and reading I came to the idea of the Code of Honor required of students at places like the College of William and Mary, the US Service Academies and Brigham Young University (BYU). At West Point the code reads: “A cadet will not lie, cheat, steal, or tolerate those who do.” By contrast, the honor code at BYU, is much longer and more inclusive. When I got to the end of the process, the OK Charity criterion was relatively short. But still it has teeth because it includes a (succinct) honor code of its own patterned after the one West Point uses.

In contrast to the detailed all-inclusive certification criterion from the Rainforest Alliance, there’s a second, better-known (and less ambitious!) certification outfit in Europe called Fairtrade Labelling Organizations International. There’s more to it than this, but basically they set a minimum price for coffee (plus, bananas, cocoa, etc.). To receive Fairtrade certification a purveyor has to pay the producer a nickel per pound above that price, .15 cents more per pound to receive the organic certification. They also certify the producers as well.

I don’t know which certification approach will win the day. But I understand that during the Dark Ages Catholic monks tried to enumerate every possible sin. Ultimately the Christian world ended up not with an exhaustive catalog of sins, but with the broader categories outlined by the “Seven Deadly Sins.”
And so I wonder, does Vanity describe the Rainforest Alliance's approach?