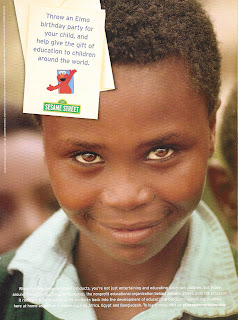 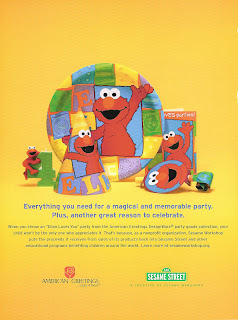 I confess I don’t have the experience abroad to judge if it’s a good idea to take Sesame Street… the 38-year-old American children’s TV show… to places like Egypt, Bangladesh, and South Africa. And I’m not sure to what degree the shows “work” in those countries.

(In fact, neither are Sesame Street’s producers. Here’s what their president and CEO Gary E. Knell wrote in their 2005 annual report: “As we’ve said before, we don’t pretend that media can, by itself, solve the many problems of the world, but we do believe­­­—and research confirms—that they can contribute to the solutions.”)

I do, however, have a background in cause-related marketing and this 2-part ad, which appeared in BabyTalk Magazine in May 2006, leaves me cold.

As we’ll see, even though it has the veneer of cause-related marketing, it’s actually just an advertisement for one of Sesame Street’s licensees. American Greetings… the greeting card giant… was a Sesame Street-licensee when this ad dropped.

The headline on the greeting card, which blocks the handsome young fellow’s head, tells us to “Throw an Elmo birthday party for your child, and help give the gift of education to children around the world.” (By the way, in surveys, consumers consistently say they dislike it when advertisers obscure, even partially, people’s faces like this.)

On first reading I assumed that maybe they had put together some kind of package like Trick of Treat for UNICEF or Share Our Strength's Great American Bake Sale whereby kids and their parents would raise funds for Sesame Workshop at birthday parties, with American Greetings providing the sponsorship grease.

That would have been interesting.

Instead… as you read the fine print… you learn that Sesame Workshop, the nonprofit which produces Sesame Street and other children’s shows, applies the money it earns from its licensees to underwrite the production of versions of Sesame Street in other countries.

Sure, and when I fill up on gas at CITGO stations kids in Venezuela are able to go to college.

Now mind you, Sesame Workshop’s licensing income is substantial. It was right around $50 million in both 2004 and 2005. I’m not judging how well Sesame Workshop uses their resources or if extending their brand in this way is in keeping with their mission.

But efforts like this cast a bad light on the tens of thousands of legitimate cause-related marketing campaigns and relationships. Moreover, it makes me question the judgment of Sesame Street for letting this one get through.

I do not like this slick ad from American Greetings.