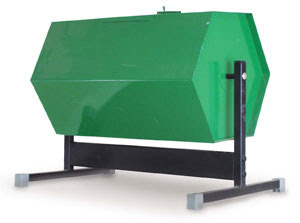 In the UK a tombala is a revolving drum typically turned by hand and used in lotteries or raffles. Tombala also describes a small-scale lottery, like at a community event.

Today we have two things in our tombala. The first is a campaign from Denmark that uses glass bottle recycling to raise money for nonprofits. The second is from Cox Communications in the United States that is part Yelp.com, part AngiesList.com and a fundraiser for charities at the same time.

The Fortune at the Bottom of the Bottle
As a kid growing up I earned money by taking glass bottles back to stores for the $.o5 cent deposit. The beverage bottling companies put the kibosh on bottle deposits in most of the 50 states (and worldwide, for that matter). Still 11 states have bottle deposits. Worldwide bottle deposit laws are in force in parts of Canada, parts of Australia, in Germany, Scandinavia and Denmark.

Now in Denmark when you return bottles to the retailer Coop Denmark’s 14 Kvickly xtra stores, you can choose to have the deposits go to two charities, UNICEF Denmark or DanChurchAid. Since the campaign started in September 2007 it’s generated more than 120,000 Krone, or about $25,750.

That seems modest, but bear in mind that the campaign is taking place in just 14 stores and has been going on for only 7 months. This is a "fortune at the bottom of the pyramid" territory.

As I mentioned bottle deposits are only required in 11 States, but because they include two of the most populous, California and New York, about 30 percent of the U.S. population lives in places with bottle deposit laws. In other words, there’s a large enough population base living in States with bottle laws that this campaign could certainly be successfully adopted in the United States.

Kudzu.com Fundraiser
Cox Communications, the third largest cable television provider in the United States with operations in 15 States has recently launched a website cheekily called Kudzu.com that has an interesting cause-related marketing component. [Kudzu is hardy vine that was introduced to the South from East Asia. Now the whole Southeastern United States is covered in Kudzu!]

Kudzu.com is a search service to help locals identify service providers like landscape designers to help you control the kudzu climbing over your fence, or plumbers. But you can also find restaurant reviews and the like, as with Yelp.com. There’s a ranking system for providers, a little bit like Angie’s List. But unlike Angie’s List, there’s no subscription fee. Kudzu.com is free.

Review sites don’t have any value unless there are reviews posted there. So to sweeten the pot when you write a review, Kudzu.com will donate $.75 cents to your charity of choice. Kudzu .com wants charities to encourage people to write plenty of reviews as a fundraiser for their charity of choice. The headline reads “Easy fundraising without candy bars and magazines,” a nod to the kind of fundraising that is common for youth organizations in the United States.

The reviews on Kudzu.com are strongest in Cox’s market areas. But the fact is, Cox certainly wants Kudzu.com to be nationwide. So a Kudzu.com fundraising campaign could take place anywhere in the United States.
No word on deadlines, donation caps or the like.