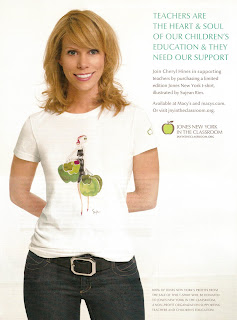 Yet still we see celebrities and causes tying the knot faster than Britney Spears on a weekend bender in Las Vegas.

What's up with that?

Certainly you have to parse out the surveys a little. Here’s what they wrote on the Cone blog:

“New Research out this week surveyed marketers to explore the roles of celebrities in cause-marketing efforts, and the findings indicate that while these spokespeople often help raise awareness of a cause, they are not particularly effective in inspiring people to act. According to (the) survey, the majority of respondents (about 58%) indicate a celeb’s tie to a cause may motivate them to look into the cause, but not necessarily become involved. Cone’s own consumer research found that Americans cite celebrity involvement as one of the least effective communication tools for nonprofits to reach them–specifically, it ranked No. 9 on a list of 10 (falling well behind such preferred methods as word-of-mouth and media coverage). And, only 15 percent of Americans said celebrities are likely to influence their decision to
support a cause or charity.”

What kind of lightweight would that question in the affirmative? How many people say, ‘oh yeah, if Patrick Dempsey is involved sign me up’? [And even if, in fact, you are so highly influenced by celebrity support of a cause that you would give time or money to that cause, would you admit it in a survey?]

Octagon First Call concludes: “While a celebrity spokesperson often grabs the public’s attention and motivates them to look into a cause, it does not necessarily generate participation results.”

Why then do charities then seek celebrities? And why do companies give preference to charities that can draw on celebrity support?

Let's be clear, not too many charities at the national level approach celebrities and ask them to work the phones for them or write fundraising letters. Just as you don’t use newspaper ads to reach teens, you don’t use celebrities to make a direct sale.

Instead, celebrity support for charities amounts to what economists call a “signaling” device. For an admissions officer at an Ivy League college, the signaling devices of a desirable student recruit might include high SAT scores, extensive extracurricular activities, and volunteering.
In evolutionary biology they call it a “fitness” test. For example, the reason that peahens typically choose the peacock with the most lavish display of feathers is because all that plumage signals that the suitor is physically healthy and thereby probably fecund.

It can be… and usually is… a whole lot of work for a charity to secure the support of a celebrity. The higher the celebrity’s profile, the harder it is to get contact information, satisfy the gatekeepers, and secure a meeting with the celebrity.

Some celebrities are so aloof that even if you got a meeting, you’d never get a yes. But if you did, it signals that your charity is very capable indeed. For instance, if David Letterman announced tomorrow that he was supporting the American Heart Association in a big way, I’d look at that esteemed charity in a whole new light.

For those of you with a rock hard bottom line focus you may be saying to yourselves ‘signaling?’ ‘fitness?’ What kind of nonsense is this? If celebrities can’t sell, who needs ‘em?

Ironically, if this is your viewpoint you’re in a good position to make the best use of celebrities. Chances are you already got plenty of marketing arrows in your quiver. Use celebrities for their celebrity. A way to attract attention to the cause. Another arrow.

Don’t kid yourself that they can do much more than that.

And if you somehow manage to find and attract that rarest of birds, the evolved celebrity who can do more than parade about in his/her beautiful feathers, well then count your lucky stars.