Cause Marketing for Good Bunnies 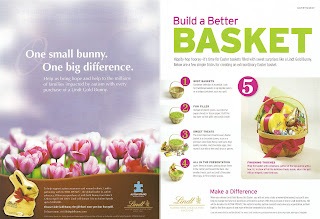 According to National Retail Federation, the biggest holidays for retail sales are: the winter holidays (i.e.Christmas/Thanksgiving) by a country mile, back to school, Mother’s Day, Valentine’s Day, followed closely by Easter.

Even though Easter falls three weeks later in 2009 than 2008… thereby allowing retailers to gear-up… Easter sales are projected to be off 14 percent as Americans economize during the recession.

So what to do if your company's annual sales rely heavily on sales during the Easter holiday?

Lindt, the Swiss chocolatier has partnered with Autism Speaks, an advocacy group, in a cute if slightly miserly cause marketing campaign.

When you buy a Lindt chocolate golden bunny between March 12 and April 12, Lindt will donate $0.10 cents to Autism Speaks, up to $100,000. You can also buy toy bunny ears, also benefiting Autism Speaks, for $3 at a microsite promoting the campaign.

Full retail on a 200-gram (7 ounce) gold bunny is $7, although you can probably find it cheaper. Still a $0.10 cent donation for even a $5 purchase seems too little both as a donation and a motivator to purchase.

Kudos to Lindt for giving Autism Speaks good exposure on the microsite.

It’s not clear whether Autism Speaks didn’t feel like they had the negotiation or brand strength to ask for more, or if Lindt just flat out wouldn’t give a greater donation per bunny. But should they renew next year the donation should be closer to $0.25 or even $0.50 cents.

Mario Vellandi said…
Indeed.
With an excellent 5% of sales, their contribution on a wholesale price of $3.50 would be about $0.18. Now if we consider that perhaps the company isn't making significant charitable contributions elsewhere, then they could reasonably raise that promotional rate to 10% since this is seasonal. Or if they're smart, they'll could find a logistical solution (packaging/displays/shipping) to drop the landed cost by $0.15, which they could pass on to the cause.
3/25/2009 9:32 AM

Paul Jones said…
Mario, it goes without saying that I agree.

Part of the challenge for Lindt is that they sell the Gold Bunny in a number of different sizes and combinations. And $0.10 is a nice round number.

I appreciate your point about wholesale markups. Because, obviously, Lindt doesn't get all of the $7 retail price.

There's a lot of factors at work here. But it's clear that if the donation is not large enough, the campaign might not boost sales.