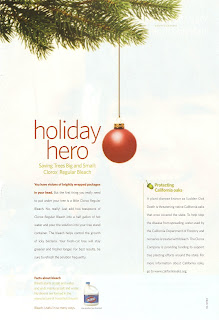 After a show in Palm Beach Florida in April 2006, David Copperfield and two companions were mugged at gunpoint by three assailants who asked for the magician’s wallet. Instead, Copperfield performed a sleight of hand, palming his wallet, phone and passport while turning out his pockets to suggest that he didn’t have anything to steal.

We have something like a sleight of hand going on with this ad for Clorox Bleach. It looks like cause marketing, with a dot.org website, something that looks like a nonprofit logo, and a mission to stop an eradicable tree disease, but in fact, there’s no cause marketing here.

This ad is from the Dec-Jan. 2009 issue of Parenting magazine and it’s the first of three consecutive pages of ads for Clorox Bleach. The headline reads: “Saving Trees Big and Small: Clorox Regular Bleach.

The art shows an ornament hanging from an evergreen branch. The body copy suggests that using Clorox Bleach to kill bacteria in water will prolong the life of live Christmas trees.

Ignore for a moment that the premise of the headline… ‘saving trees’… is a logical nonstarter since before a Christmas tree enters you home it has to be cut down first!

Concentrate instead on the column on the right that mentions that the State of California uses bleach-treated water to treat oak trees in the state suffering from a disease called Sudden Oak Death. So the bleach that the cash-strapped State uses to combat Sudden Oak Death comes as an in-kind donation from Clorox, right?

Who can say? The copy reads: “To help stop the disease from spreading, water used by the California Department of Forestry and nurseries is treated with bleach.”

Hm. Does that mean Clorox bleach or the house brand at Safeway?

The body copy continues, “The Clorox Company is providing funding to support tree planting efforts around the state. For more information about California oaks, go to www.californiaoaks.org.”

So, then, Clorox pays the Oakland nonprofit called the California Oak Foundation to plant California oaks around the Golden State?

This ad is all legerdemain.

But just as you won’t figure out how David Copperfield makes the Statue of Liberty disappear by watching more closely the distracting sleight of hand, this ad won’t tell you anything about how The Clorox Company really “saves trees.”

The Clorox Company and the California Oak Foundation are both in Oakland, so it's much easier for them to get acquainted than if Clorox were in Florida.

I don't think anything nefarious is going on. But I have no qualms about pulling back the curtain and showing things for what they are.

Mazarine said…
I LOVE this post! It made me giggle in the first paragraph! Thank you for showing how corporations are "green-washing" their ad campaigns.

Way to slam Clorox- (Next time mention that Burt's Bees is owned by Clorox-so your "green" purchase of lip balm is actually feeding this spin machine) (Nothing like a little bleach on your lips!)

And if you thought Body Shop was a safe, cause-related solution, THINK AGAIN. Owned by L'Oreal/Nestle since 2006.

Tom's of Maine? Try again. Owned by Palmolive. (Yes, to go with your bleached lips, now you can get petroleum products on your teeth too!)

So, who is safe? Good question. And which nonprofits can you trust, if they are bought out by corporate interests?

You're spot on. All those entities that have long positioned themselves as 'the little guys' are now owned by the big guys.

For those people who want their cause marketing to come from smaller companies, Mazarine has outed some prominent small brands for what their are; parts of bigger companies.