'Cause-nitive Dissonance,' Bad Postioning or Both in KFC Cause Marketing Campaign? 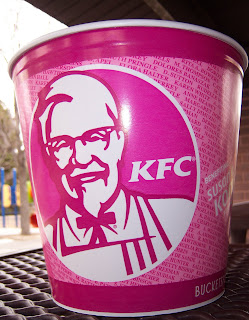 Through May 9, 2010 each bucket of specially-marked KFC chicken sold generates a $.50 donation to Susan G. Komen for the Cure. The KFC bucket also invites you to visit bucketsforthecure.com to make an additional donation.

As the website URL suggests, the campaign sports the unwieldy name of 'Buckets for the Cure."

The redoubtable Scotty Henderson, and many others, have raised the issue of "cause-nitive dissonance,' to coin a term.

That is whether fried food should be supporting breast cancer research, since research has shown obesity be a risk-factor for breast cancer and since fried chicken is high in fat. Many, many others, including the Wall Street Journal, have weighed in.

This issue of 'tainted money' is one I've raised more than once and can appreciate.

Back in 2007 Newsweek reporter Jessica Bennett asked me, "Advertising is obviously not about morals. But isn't there a moral conflict in the idea that cause marketing is tapping into consumption guilt while at the same time feeding that excess?"

Here was my response then and I think it also speaks to this case as well.

"It seems to me that you're asking the tainted money question. Every charity in the country sooner or later deals with the question of 'tainted' money. And they have to decide for themselves what kind of money... for them... is tainted."

"And it's a different answer for one charity than it is for the next. When I was at Children's Miracle Network, for instance, we had the chance to do a deal with a beer company but we choose not to. But I believe the MDA still has a relationship of longstanding with Coors. Hard-core environmental charities might not take money from the oil companies."

"What your question suggests to me is that money that comes from a promotion that encourages consumption is considered by some to be tainted. My response is: that depends on the charity. "

"Personally, if I were the executive director of a charity that filled some basic human need; shelter, food, clothing, maybe some kinds of healthcare, there probably wouldn't be any money that was 'tainted.'"

"I believe that's the way Mother Teresa looked at the large donations from Charles Keating, a man she praised effusively at the time even though he eventually did jailtime for his crimes. On the other hand, if I were the executive director of a symphony, I would certainly turn down money from someone like Keating."

Am as I as a potential patron of KFC really supposed to care about their internal fundraising goals?

How different is that from Exxon telling me that they're trying to trying to have their best quarter ever?

What do I care about KFC's apparent sense of competition with other Komen sponsors?

Shouldn't the appeal that's inherent in Komen (added to the ridiculous volume that KFC does) be enough to put the Buckets for the Cure campaign over the top in people's hearts and minds?

It seems that KFC, and one supposes, Komen have confused marketing goals with marketing positioning.

And that strikes me as laziness by the creatives at both KFC, Komen, and any agencies they used.

saraelkins said…
Makes you wonder IF there will be any back-lash? Will Komen back down after all the negative press? Certainly is a mixed message they are sending.
4/22/2010 10:24 AM

I don't know if you followed the link from the post to the Wall Street Journal article, but here's a quote from a Komen spokesperson:

"Andrea Rader, a Komen spokesperson, says KFC gives the charity a chance to 'reach a lot of people we wouldn’t ordinarily reach' with information on breast health. 'We saw this as an opportunity to engage,' she says. As for the chicken, she points to the grilled option and KFC’s veggie sides as healthful options."

That doesn't sound defensive to me. What's more, I expect the part about 'reaching people they don't ordinarily reach' it's true.

The people who eat at KFC are not the 'chattering classes' that are complaining about this campaign.

Paul Jones said…
In the interest of furthering this discussion of 'tainted money' I just learned of a dilemma facing a charity in Scotland.

Girlguiding Scotland has received a £400,000 ($613,000 at today's exchange rates) bequest by a man who was convicted of sexually molesting three girls over a 20-year period.

Girlguiding in the UK is similar to Girl Scouts here in the U.S.

It's easy to see both sides of the argument.

With an extra £400,000, Girlguiding could better train its members to avoid sexual offenders.

On the other side, this man who died last July, with this last act is trying to reclaim his reputation with a substantial financial gift.

Caitlin said…
Thanks for this post. It is a truly offensive and harmful alliance. Breast Cancer Action's "What the Cluck?" campaign is calling out KFC and Susan G. Komen for the Cure on this pinkwashing partnership. We believe that if you want to reach underserved communities, you shouldn't work with damage-makers like KFC, but instead work with the community health clinics, economic development corporations, and community coalitions that are working to reverse the damage KFC and others have done. Over 1,500 people from all over the country have written to them to denounce this pinkwashing. You can find the campaign here: www.thinkbeforeyoupink.org.
4/27/2010 11:32 AM

SteveG said…
I am a firm believer in take the money. I understand the concern that some charities may have when it comes to PR and some rather vocal groups of people. But, to me, it seems that refusing a donation that can be used for something good because it may have some possible PR backlash.

The people buying pink buckets are going to be buying buckets of chicken anyway, why would you deny the donation and the potential good that could come from it based on a few loud groups that don't like chicken?

Either Beck or Michael Stipe said it best when they were accused of selling out by letting their music be used by car and oil companies, I take their money and spend it on causes that are opposed to them. It doesn't matter, in almost every case, where the money comes from if it is being used for something good..

The issue in the UK where Forester-Smith bequeathed £400,000 to Girlguiding. Perhaps he saw the error of his past. Perhaps he wanted to try to do something good with his last acts. But to deny the good that can come from that money just strikes me as wasteful and foolish.