A recent flyer from a local grocer with about 10 stores in the chain features two cause marketing campaigns and is timed specifically for the holiday season, one for the local food bank and one for the Salvation Army’s Angel Tree program.

For me this raises a question; regardless of how generous the intent of the grocer, how many cause campaigns can a retailer reasonably sustain at a time?

Although these are both full-page images, I didn’t crop them so that you could get a clear sense of the amount of space the grocer, called Macys, devoted to both causes in the same flyer.

When you’re in the store, purchase a bag of food and pick your favorite team and the food goes to the associated food bank. The team whose fans donate the most food and money get bragging rights for the year. Of course the real beneficiary is the patrons of the two food banks.

The food bank rivalry effort was found on page 6. A few pages deeper into the flyer was an effort benefiting the Angel Tree, a Salvation Army effort for needy children and the elderly at Christmastime. 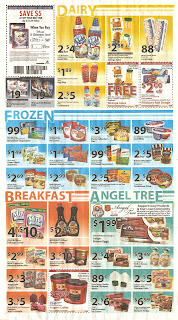 This is a transactional cause marketing campaign. When you buy goods with the Utah’s Own seal, a portion of the proceeds goes to the Angel Tree effort sponsored by the local unit of the Salvation Army. The CBS-affiliate TV station, KUTV2, co-sponsors the Angel Tree.

I can’t let this pass without saying that the ‘portion of the proceeds’ language is weak and almost always counterproductive to transactional cause marketing. Better to describe what the donation is and how it’s determined.

Utah’s Own designates that the item bearing the seal is manufactured in the state. It’s vague who’s doing the donating, the products or Utah’s Own. The Utah’s Own seal is administered by the state’s Department of Agriculture and Food.

Both these efforts are ‘two-fers,’ that is, two for the price of one. The food bank effort piggy-backs on the considerable rivalry between the University of Utah and Brigham Young University (BYU).

The Angel Tree campaign rides the coat-tails of the growing ‘buy local first,’ which advocates that by buying locally-produced foods you get products that are fresher, have traveled less distance (and thereby used less fuel in transportation), and benefit the local economy more than if you buy the products of national competitors.

Because of this two-fer aspect, I think both these campaigns are more sustainable than if they relied solely on their own merits.

Also, only the food bank effort potentially requires cashiers to ask shoppers for donations. Running two campaigns that required that kind of ask would probably be a nonstarter for Macys.