Strategic vs. Non-Strategic Cause Marketing Relationships 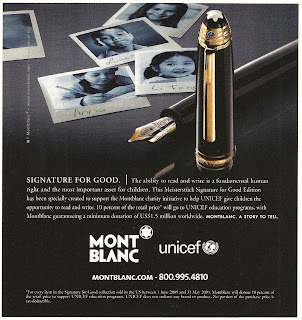 There’s been some chatter recently in the blogosphere and elsewhere about strategic cause marketing. That is, if you’re a sponsor, ensuring that your sponsorship of the cause bears some rational relationship to your business.

The effort on the left from Montblanc, the fountain pen maker, pretty much passes muster. From June 2009 to May 2010 when you bought this special edition pen, called the Meisterstruck Signature for Good Edition, 10 percent of the purchase price went to a UNICEF education programs because “The ability to read and write is a fundamental human right and the most important asset to children.”

(For examples of other Montblanc 'donation pens,' click here. For this campaign, Montblanc set a minimum donation of $1.5 million. And while we're at it, let us now take a moment to praise a campaign that sets a minimum donation, but not a maximum. Huzzahs to Montblanc)!

I would have said that parents who can feed and shelter their children is a child’s most important asset, but I guess that’s because I’m a parent and not high-end fountain pen maker.

Caviling about silly hyperbole in ad copy aside, it’s easy to see the relationship between Mont Blanc and UNICEF’s educational programs.

But there’s plenty of successful cause marketing that goes on between sponsors and charities that share almost no strategic relationship. 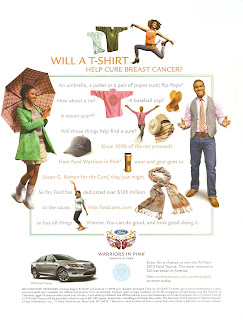 Critics would say that just because the campaign is successful for Komen doesn’t mean it’s a strategic choice for Ford. By rights, the thinking goes, Ford should be doing cause marketing for environmental organizations. Ford vehicles and the fuel they run on, deplete and pollute the earth’s resources and no matter what else it does Ford to mitigate that it should also do so with its cause marketing efforts.

But Ford supporting the Sierra Club or the Environmental Defense Fund, say, or even the Nature Conservancy, is a veritable minefield for both Ford and any would-be environmental partner. All three of those nonprofit organizations are membership-based and members of the Sierra Club, in particular, fought a bloody battle over cause marketing deals the Club engaged in with The Clorox Company, to cite one.

I sincerely doubt Ford and the Sierra Club could find common ground.

Then there’s the problem of what that cause marketing might look like. Warriors in Pink sells stuff; a lot of apparel but also accessories like scarves, and ties, a totes, along with a sprinkling of keychains and license plate frames. That model would be tainted for many environmental organizations, too.

Likewise you couldn’t exactly do transactional cause marketing either. Try out this thought experiment to see what I mean: “When you buy the 2011 F-150 Nature Conservancy edition Ford will donate an acre of grasslands to the Nature Conservancy…”

I’m not saying creative people couldn’t design something that worked for both parties. What I am saying is that a sponsor’s best choice for a charity cause marketing partner isn’t always necessarily the most strategic choice.