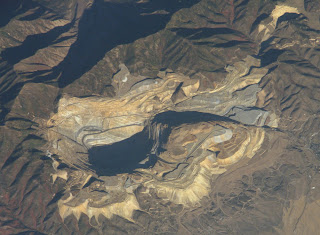 The Bingham Canyon Mine in the southwest corner of the Salt Lake Valley in Utah where I live is said to be the deepest open-pit mine in the world. So deep you can see it from space. On the lip of the pit they have a visitor’s center along with spotting scopes to look into the void and at the mining activity. (The photo at left was taken from the International Space Station).

The mine, owned by Kennecott and its corporate parent Rio Tinto, charges a modest vehicle entrance fee that goes to the Kennecott Utah Copper Visitor’s Center Charitable Foundation, a 501(c)(3) private foundation which divvies it up the proceeds among local charities. There’s also a gift shop in the visitor’s center and proceeds from the sales of items there also benefits the Foundation.

The Foundation’s board, comprised of community members who serve without compensation, gets together annually to divvy up the proceeds among local charities which apply for grants. The year 2010 was a record year for the Foundation, it donated $186,000. To 106 local charities!

I’m not trying to paint Kennecott as a miserly corporate giver. On the contrary Kennecott is fairly generous corporate donor giving about $1 million per year apart from the Kennecott Utah Copper Visitor’s Center Charitable Foundation.

Kennecott is also the largest taxable entity in the Salt Lake Valley. Between taxes, wages and benefits, the company puts $900 million into the local economy. Moreover, by itself the mine produces 25 percent of the refined US copper production, 7 percent of the country’s refined gold, 10 percent of its refined silver and 23 percent of its molybdenum. Tiffany and Walmart buy their gold from Kennecott because on balance they think it’s the most responsibly-mined gold in the world, although local and national critics disagree.

The tax money is equalized among government entities and school districts across the Valley. In other words, the homeless shelter that receives money from local city governments probably benefited more financially from Kennecott’s taxation than from the grant they got from the Bingham Canyon Mine Visitor’s Center Foundation.

My question is, why does the Board divide its grant money so broadly? Why don’t they pick just one or maybe two recipients a year to receive the whole sum? The winning charity or charities would then be out of the running for another grant the next 50 years or so.

We all know that charities are hurting these days, but not many of them are going to miss $500 or $1,000, or even $1754.71, especially since they probably paid someone to write the grant.

By the same token, which of those 106 charities couldn’t figure out a way to effectively deploy a one-time grant of $186,000?