The Art of Cause Marketing 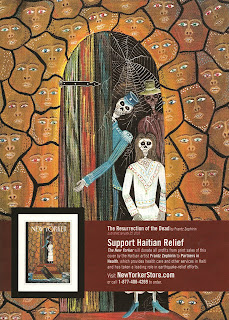 Today I profile two cause marketing efforts that use art as a vehicle to fundraise on behalf of two different nonprofits.

The first, from the Alden Keene Cause Marketing Database, is sponsored by The New Yorker magazine. When you buy the cover art from Jan. 25, 2010, an evocative piece called “The Resurrection of the Dead” by Frantz Zephirin, The New Yorker will donate profits from print sales to Partners in Health, a charity based in Boston serving health care needs in Haiti, Malawi, Peru, Rwanda and elsewhere.

The prints start at $125 and range up to $445. There's a lot of room in those price points for profit depending on whether or not The New Yorker and/or Zephirin takes a cut. Zephirin’s home was in Mariani, very near the epicenter of the devastating Jan 12, 2010 earthquake. It’s admirable how quickly The New Yorker put together this promotion.

The three characters in the doorway are guede, spirits who guard the space between life and death. In that way they’re similar to the Janus characters in the Alden Keene logo at the top of the far right column of this blog. Janus was the Roman god of transitions and was often placed over doorways or at fence gates in Ancient Rome. 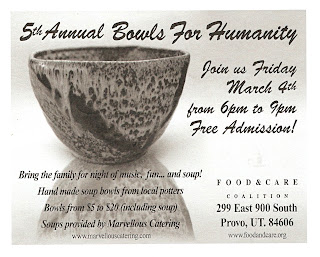 The fundraiser, called Bowls for Humanity, took place Friday, March 4, 2011 and benefited the Food & Care Coalition, a nonprofit food bank and resource center for the homeless in and around Provo, Utah.

It’s hard to know if the modest price reflects the local economy or if there’s just a huge oversupply of potters in Provo, but $5 for a hand made bowl that includes soup strikes me as a bargain. For that matter $20 is too.

I like the intersection of art and cause marketing, but I think both campaigns could be profitably extended a little further. The New Yorker ought to offer a limited edition hand-signed signed by the artist Frantz Zephirin, say 100 pieces on canvas. The price ought to reflect the scarcity of the prints. A few could be held out for auctions for Partners in Health fundraising events.

Food & Care Coalition could ask patrons of Bowls for Humanity to use the soup bowl to collect their pocket change throughout the year. Then bring it in either periodically or at the next event. If they donate more than, say, $15 they should get a free bowl of soup at the next Bowls for Humanity fundraiser. Breadsticks would be extra ;).

How would you extend these artful promotions?