Big Cause Marketing From a Small Business 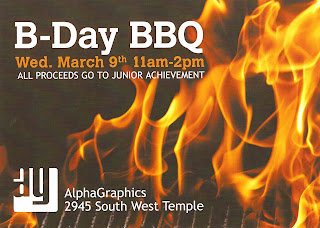 Years ago Junior Achievement had one of the most cleared-eyed policy manuals on cause marketing I’ve ever come across. It was insightful, strictly ethical, thorough, and filled with good ideas. And you’re going to have to take my word on all that because I can’t find it in my files or on the Junior Achievement website. If anybody has a copy, I’d love to see it again.

But I wonder what that Junior Achievement policy manual would have said about this modest campaign from an AlphaGraphics store in Salt Lake City?

In celebration of the store’s founding and the owner’s birthday, they’re hosting a BBQ benefiting Junior Achievement next Wednesday. Proceeds from the sale of the meal benefit the nonprofit charity whose three-part mission is youth development, education development, and economic development. 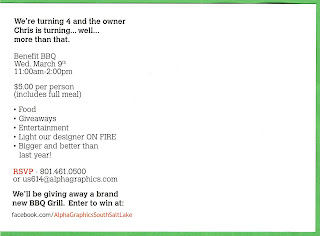 The programs and materials at Junior Achievement (JA) are strong. It calls on more than 375,000 volunteers worldwide who serve tens of millions of kids. It has a clean operating record, a long history, a broad reach, and an important mission.

The result is that JA is like catnip for sponsors. HP, Fedex, Sam’s Club, General Electric, Barclays Bank, Citi, Capital One, and others all give $500,000 or more a year. AT&T gives more than $5 million. And the postcard sized handcard at the left demonstrates that Junior Achievement is attractive to small companies, too.

If JA has a challenge it may be that there’s not much emotion traveling along with all its common sense appeal. That may be why they filled their 2010 annual report with so many images of Junior Achievers from desperately poor conditions.

So far as it goes there’s nothing wrong with this local campaign except a poverty of ambition. JA is an estimable cause and a terrific fit for AlphaGraphics. It deserves more.
All that could be done for free or at discounted rates by invoking the cause and all would also greatly benefit this AlphaGraphics store.

What else could AlphaGraphics do inexpensively to generate funds and awareness? Weigh in with your ideas in the comments section below.

Anonymous said…
To the writer of this blog, did you happen to contact AlphaGrpahics about this benefit event to find out how it might be tied in with other AlphaGraphics efforts to raise money for Junior Achievements? Or, did you base your assumptions solely on this one postcard that you have acquired? Where is your research on all efforts before assuming that minimal is being done? Also, do you know the purpose of this single event through the company's directive or is that an inconsequential detail to you? I would just like to understand why you choose to critique even a small amount of effort to help out a cause when small business get hit up thousands of times a year to do just this.
3/01/2011 9:18 AM

Any assumptions I made were based on the store's promotional material, which I included in the Post. I passed no judgement on what this store, or AlphaGraphics as a whole does for Junior Achievement or any other charity.

My post was based entirely on what they could do to make this promotion better, not on what they have or haven't done in the past or what they intend to do in the future.

I think if you reread my post you'll find that while it is strongly worded, it's not terribly critical of this store or of AlphaGraphics in general.

Many businesses large and small, handle the charity donation question by broadly spreading their donation budget around.

There's a hot debate among corporate donors about which approach is the best.

In the event that a small business chooses to support only a handful of charities, one of the things the business probably ought to do is really throw its energy behind its support of those causes.

The payoff of this post, if I can be so bold, is ideas about how to do so for this one small promotion.

Thanks for your comments. I appreciate your passion.

small business marketing consulting said…
"The Facebook element is nice, but where’s the rest of social media outreach?" - It is important to look for high traffic social media sites that can increase the chance of converting the traffic into sales since these popular websites generate real-time traffic.
4/03/2011 6:54 PM