Earth Day has a Messaging Problem 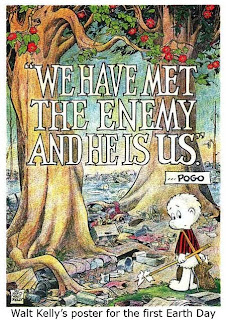 Friday, April 22 is the 41st Earth Day in the United States, a day that was originally conceived as a kind of environmental ‘teach-in.’

But I think it’s fair to say that most Americans understood those first few Earth Days not as a ‘teach-in’ but as a reminder to clean up litter, as the poster at the left from the great cartoonist Walt Kelly underscores.

National carbon monoxide emissions are not quite a third of what they were in 1970. Ammonia emissions are lower now than then, so are nitrogen oxides, particulates, sulfur dioxides, and volatile organic compounds.

Both surface water and groundwater are cleaner than they were in 1970 thanks to the Clean Water Acts and the Safe Drinking Water Act. This despite the fact that the U.S. population has grown by 105 million people since 1970.

Let me be clear, neither our air nor our water is yet what Americans want it to be, and the country still creates too much waste. I’m not arguing that we need to take the foot off of the accelerator in our efforts to take care of our planet.

All I’m saying is that what we’ve done up until now in three key areas has led to marked improvements.

My problem with Earth Day as it’s presently constituted is that there’s too many emphases for people to keep in their heads. Earth Day is markedly more sophisticated in 2011 than it was in 1970. Trouble is, we've still got the same human brains we've always had.

The Earth Day Network website lists 15 campaigns of emphasis: School Greenings Across the USA; Building the Climate Movement; A Billion Acts of Green®; The Green Generation™; Green Economy; Earth Day-India; The Canopy Project; Athletes for the Earth; Arts for the Earth; No Child Left Inside; National Civic Education Project; Healthy Schools Act; Green Schools; The Road to Rio™; Women and the Green Economy.

I was so turned off by the number that I didn’t even bother checking what they were about. 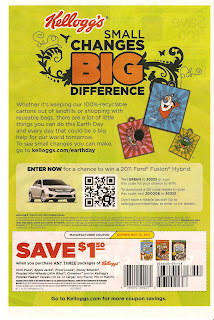 The Kellogg’s Earthday Sweepstakes website, highlighted in the FSI (free-standing insert) at the left, has a rotating banner that lists no less than 20 things we could do as individuals to improve the environment.

My Earth Day friends, this is too much. I know the earth’s environment is a system and that a lot of improvements need to be made and made quickly.

But just as the human mind has place for two colas (in America it’s Coke and Pepsi)…two smart phone operating systems; Apple and Android…two late night talk show hosts; Letterman and Leno and two beer companies; Budweiser and Miller… it has room for no more than two environmental goals at a time.

And don’t come back to me with the exceptions.

Environmentalists really don’t want to occupy the amount of space reserved in the human mind for Pabst, Dr. Pepper, and the Symbian OS.

This is made worse by the complicated calculus of environmentalism. Trees for instance, are good because the soak up greenhouse gasses. Until they die, decompose and release their carbon and then they’re bad. Compact fluorescent lights are good because they produce good light with less power and (usually) last longer than filament light bulbs. Until they fail at which point they have to be carefully disposed of because they contain trace amounts of mercury, which is a toxic heavy metal.

Here’s my plea to the Earth Day organization and environmentalists everywhere; pick two things and keep hitting them until those two things are better. Then move to the next two things on the list. America is better off environmentally than it was on that first Earth Day 41 years ago. And it can get better still. But you gotta message it smarter.