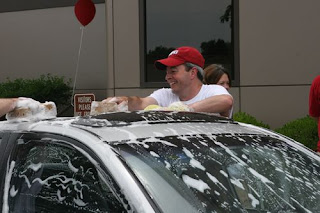 A press release yesterday announced that Rite Aid, the $25.2 billion (sales) retail drug chain has passed the $50 million mark in donations to Children’s Miracle Network Hospitals, the sixth company among CMNH’s stable of sponsors to do so. This is good news for small, ambitious charities everywhere.

Since 1983 CMNH has generated more than $4.3 billion, or on average, about $153 million a year. While CMNH has a successful direct giving effort, it’s only about 10 years old. And the cause does little if any major gifts fundraising or planned giving. All but a very small percentage of that $4.3 billion total was generated through cause marketing, grassroots fundraising, or some variation thereof. (The photo at the left of Rite Aid’s President and CEO, John Standley is therefore instructive. He's at a fundraising car wash benefiting Children’s Miracle Network Hospitals.)

The reason that’s so is because of the interesting dynamic that exists between CMNH and the 170 hospitals affiliated with Children’s Miracle Network Hospitals. It goes almost without saying that in 1983 the hospitals did all the traditional kinds of fundraising available to them. So at CMNH’s founding it couldn’t bring much value to the relationship if all it tried to do was compete for the same dollars with the hospitals it hoped to help.

Consequently CMNH... which started out as a telethon charity... stumbled upon the jessant form of fundraising called cause marketing and found its niche.

Once it started down the path of doing all cause marketing all the time, CMN had no way to grow other than to innovate. And they’ve done so reliably for a generation now.

As a result, while there are larger charities than CMNH doing cause marketing, I don’t believe there’s another one that has raised more money via cause marketing only.

All this from a little charity not in New York or Los Angeles (or for that matter London or Tokyo) but in tiny Salt Lake City, Utah, founded and staffed largely by people from a state better known for its abundant natural beauty than abundant corporate sharpies.

For cause marketers the story of Children’s Miracle Network Hospitals is the story of David and Goliath and the little engine that could.

The story of CMNH’s success should have the same effect on other charity cause marketers that the story Roger Banister’s breaking the 4-minute mile has had on middle distance runners. Ten years after Sir Roger ran a sub 4-minute mile in 1954 on the Iffley Road Track at Oxford University, a high school kid from Kansas named Jim Ryan ran the mile in 3:59. So have 40-year-olds. Some runners have bested it dozens of times. Fifty-seven years after Bannister broke the psychological barrier of the 4-minute mile, it is the "standard for professional middle distance male runners," according to Wikipedia.

Children's Miracle Network Hospitals raising $4.3 billion in 28 years is the story charity cause marketers should tell themselves when they're feeling down. Because if in the earliest days of cause marketing someone from Utah could sell a kind of sponsorship no one had ever heard of benefiting a charity that even now flies under the radar, you can probably figure it out, too.