Cause Marketing Patriots and Public Servants

In the lead up to Independence Day in the United States, which commemorates the signing of the Declaration of Independence on July 4, 1776, I spotted a handful of cause marketing wherein the ‘cause’ is a burgeoning new coalition of American servicemen and women, police officers, and firefighters.

I’ve already posted on the Lowe’s/Pepsi nationwide co-branded effort that offered discounts to servicemen and women and their families, along with other benefits. And I’ve posted on studies that demonstrate how Americans right now are responsive to the needs of the members of the military and their families.

Rather than revisit that effort at any length I want to concentrate on two local efforts that highlight this budding trend of lumping together firefighters and police with the military.

In the first the local Toyota Dealers group offers Military, Fire, Police (MFP) a 10% discount off vehicle repair work, up to a maximum discount of $50. The offer was activated via a monthly direct mail piece. 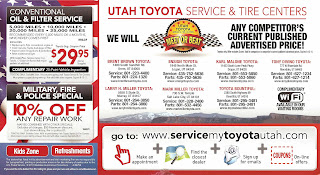 Hoopes Vision offers $1,000 off LASIK vision correction eye surgery to members of the MFP and spouses. The offer was advertised in a monthly magazine of ads, also mailed to homes.

How do we know this is cause marketing rather than just targeted marketing?

Timing. In the wake of Sept. 11 terrorist attacks in New York, Washington, DC, and Pennsylvania it’s possible that that date will become a kind of holiday or rallying point to recognize the efforts and sacrifices of firefighters and police officers nationwide. In the meantime, the celebration of the country’s independence fulfills that role and also allows the inclusion of the country’s military. In short, after 9/11 public servants like firefighter and police officers came to be celebrated as patriots in their own right. 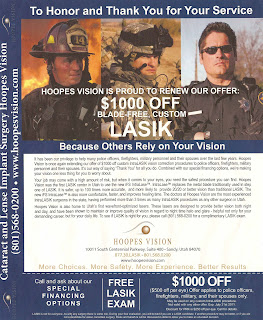 Small number of people being targeted. According to the Utah Department of Workforce Services the State has 4,101 police and sheriffs patrol officers and 2094 firefighters. Add another 1,000 people who serve in supervisory roles and that brings the total to 7,195 people in that State carrying a police or firefighter ID. I couldn’t find a corresponding statistic that told me exactly how many Utahns serve in the armed forces. But nationwide about .0095% of the population serves in either on active duty or in the reserves. While I doubt Utah’s number is as high as it is nationwide, if national averages hold, about twenty-six thousand Utahns are in the military. Therefore in Utah the combination of MFP represents perhaps 1.2 percent of the State’s population.

Easier/cheaper ways to target MFPs. The military, fire and police each have their own way of reaching its members. Hill Air Force Base, the largest military post in the state, has its own newspaper. So does the State’s National Guard contingent. Police and firefighters unions have their own way to publish to members. If Hoopes and the Toyota Dealers group meant only to reach MFPs, there’s more targeted and effective ways to do so.

Instead, with these ads Hoopes and the Toyota Dealers group are demonstrating to both the members of MFP and to the larger public a kind of old-fashioned (and American) patriotism, dressed up for today.

Think about it this way: In the wake of Declaration of Independence, it’s hard to imagine that Thomas Jefferson, who wrote the document, ever had to buy his own drink when stepped into a public house in his home state of Virginia. Heaven knows that after the long and arduous Revolutionary War that General George Washington never did.

So on July 5, let’s raise a toast to them all: Washington, Jefferson, members of the military, firefighters and police officers!