Cause Marketing During Trade Shows 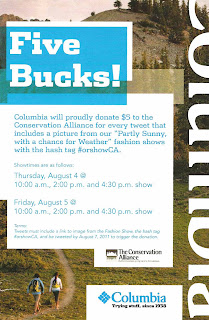 The Summer 2011 Outdoor Retailer Show attracts something close to 25,000 people… about the population of a small city… and puts them in a space about the size of 2 city blocks square.

Several cause marketers realized it was also a good time to do a little cause marketing to a densely populated and captive audience. Gerber, the knife maker repeated a promotion in ran in January 2011 at the SHOT (Shooting Hunting Outdoor Trade) Show in Las Vegas by selling a knife branded to TV adventurer Bear Grylls and benefiting the Boy Scouts of America. Buy the pocket knife for $10 and proceeds benefit the BSA.

Columbia Sports Wear held six fashion shows during the 2011 show featuring willowy models and its tech-savvy outdoor wear. When you Tweeted a picture from one of the shows and included the hashtag #ORshowCA, they made a $5 donation to the Conservation Alliance.

Almost any trade show could do similar cause marketing promotions.

Here’s my good friend Scott Welch from Columbia explaining the promotion and Columbia’s dedication to the Conservation Alliance.