I'm No Fan of This Cause Marketing Ad Campaign 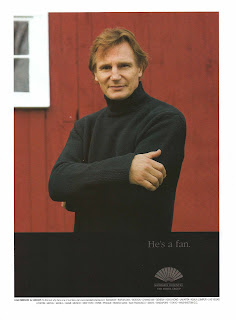 On 14 June, 2007 I posted on the problems I had with Mandarin Oriental’s cause marketing campaign featuring various celebrities and their cause of choice. Now, 4 years later, if anything the campaign is worse because it still does the same thing; a celebrity’s charity of choice gets a mention and a $10,000 donation, and nothing more.

Here’s what I wrote back then:

There are two kinds of celebrities in the world; those that are in the Mandarin Oriental ad campaign running right now and those whose agents are trying to get them in.

It’s an image ad campaign for the 17 (now 23) hotels that are part of the Mandarin Oriental Hotel Group. In it celebrities including I.M. Pei, Zubin Mehta, Helen Mirren, Elle McPherson, and Dame Edna-Barry Humphries are photographed in settings of their choice and they name their favorite Mandarin property. Dame Edna-Barry Humphries got to name two! (Now there’s a new set of celebrity ‘fans,’ with a few holdovers including Mirren, Neeson [see below] and Pei).

Every celebrity appearance carries with it a $10,000 donation to the charity of the celebrity’s choosing. Neeson’s charity is UNICEF and his short profile on the Mandarin's website includes a UNICEF logo (but no link). Most of the other charities are smaller and less prominent than UNICEF. 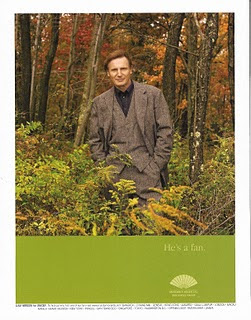 It goes almost without saying that the donation amount is too small to be meaningful. I don’t know how the deal is structured but it wouldn’t surprise me to learn that the celebrities wave all or part their cash fee in lieu of the charitable donation and then take the rest in hotel stays.

That’s what makes it so appealing to celebrities… they get to stay in lavish Mandarin hotels for the price of the time it took to do the photo shoot. Better still for the celebrities, the ads feature them, not the hotels. In the process they look like good citizens. If you listen closely you can almost hear agents the world over calling the Mandarin’s ad agency.

By contrast, how interesting would it be if the Mandarin Oriental Group agreed to match what the celebrity donates to his or her preferred charity up to a certain amount? Interesting and unlikely. Most charitable donations from celebrities come in the form of in-kind gifts…read ‘time.’

There’s other things to like in this campaign. The celebrity list is an accomplished and eclectic group, with an especially strong showing of Asians, which makes sense since better that half of the Mandarin’s hotels are in Asia.

However, I think the creative is spare and subtle to the point almost of obfuscation, especially when it comes to the charities. “Liam Neeson for UNICEF” makes sense because UNICEF has plenty of built-in affinity.

But Helen Mirren’s charity is called “Help the Aged” (since changed to Meals on Wheels). Sounds worthy enough, but I’ve never heard of it and there’s no website link, which means that most of these charities will get no more than just the $10,000 out of this promotion.

If I sound especially tart in that post it’s because campaign seemed so unhelpful to the chosen causes, and it’s mainly due to a lack of imagination from Mandarin Oriental's marketers.

Why couldn’t the Mandarin Oriental offer the causes room-nights to auction at their fundraisers, or a specialty drink named after the celebrity that benefits the cause for a few weeks, or an upgrade of some kind when people offer to make a donation to the celebrity’s cause. Luxury hotels have done all these things and more.

After more than four years the Mandarin has six new hotels dotting the globe but the same tired thinking in its cause marketing.