Towards a More Hygienic Cause Marketing Campaign for Lysol 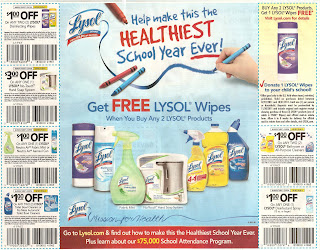 With the approaching start of the new school year Lysol brand of disinfectant has a cause marketing campaign that awards $25,000 in prizes to the school with the highest average attendance from November 1 to 30, 2011.

If you’re like me it took me a couple of beats to understand what school attendance has to do with Lysol. But even after I got it the Lysol Blue Ribbon Attendance Challenge doesn’t seem to do all the things Lysol needs it to do.

Here’s how the Lysol Blue Ribbon Attendance Challenge works. You must register your school online in the contest at Lysol.com. The contest runs throughout the month of November and the winning school gets $25,000 in prizes. As of this writing the contest’s official handbook wasn’t yet available online.

As a part of the promotion Lysol offers a school curriculum on germs and prevention that teachers can use in their classrooms.

That’s really… um… earnest. But it seems like half an effort.

What Lysol really needs out of this effort is to generate good buzz for a brand that’s pretty stale. What part of anything I’ve described above would you Tweet or post on your Facebook or Tumblr page?

Part of the problem is the donation amount. Last year Edgeworth Elementary in Hacienda Heights, California won the (unspecified) Grand Prize. Indeed, the $25,000 in prizes this year may go to multiple schools… Lysol’s website is wonderfully vague on this point.

Total prizes of $25,000 just can’t be taken seriously in a country with more than 90,000 elementary schools! As is, small schools have an advantage in the Challenge. As do schools in states with mild weather in November.

But by itself a better and fairer prize package wouldn’t make you more likely to Tweet out the Lysol Blue Ribbon Attendance Challenge either.

Imagine in addition to better prizes some kind of contest asking schools to produce a small play that depicts germ-free hygiene in schools, and open up divisions for middle schools, junior and high schools. Lysol probably wouldn’t even need to require that its products be portrayed in the plays. The schools would just do it.

Naturally videos of the plays would end up on YouTube. In fact, YouTube oughta be the official entry vehicle for the contest. Call it the Lysol Blue Ribbon Video Challenge.

As I see it, the video challenge would be in addition to the attendance challenge.

And, of course, thousands of videos would be publicity fodder for Lysol and its PR agency, who would pitch this story to media outlets wherever schools enter the Challenge.