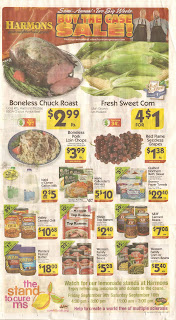 On Wednesdays in my market all the major grocers insert their flyer in the local newspaper. Yesterday all of them save WalMart had a cause marketing element in their respective flyers.

Here’s a review of each:

Smith’s is owned by grocery giant Kroger, WalMart’s largest domestic grocery competitor. Their campaign benefits the USO, the charity that aids members of the military and their families and now celebrating its 70th anniversary.

The USO reusable bag is an extension of a campaign for the USO Kroger announced in July, 2011. Participating stores have coin donation canisters at check stands and/or ask customers to round up their purchases to the nearest dollar to benefit the USO. The full campaign lasts one year with a goal of raising $1 million. A limited promotion with Procter & Gamble has already generated $250,000.

In addition, the #47 Kroger NASCAR features USO branding this season and Kroger locations with medical clinics called ‘The Little Clinic’ donated $1 for each sports physical during July and August. You can also donate directly to the USO at a special microsite.

I haven’t seen this promotion in-store yet, but based on what I’ve read I don’t understand the connection between a reusable bag and the USO. I like Kroger’s pledge of support to the USO, whose services I used when I was in the National Guard. They do important work. The USO is new to cause marketing, it’s 70-year history notwithstanding. So the onus for picking a non-sequitur premium item to sell is on Kroger.

The Stand to Cure MS is a campaign in Utah and Southern Idaho from the local chapter of the Multiple Sclerosis Society. The idea was inspired 2008 by a six-year-old named Thomas whose mom was diagnosed with MS. Young Thomas started a lemonade stand to help the fight against the scourge disease and raised $1,000 that first year.

The local MS chapter built on the idea beginning in 2009 and enlisted the support of Harmons (see above), a local grocery chain. Other grocers affiliated with Associated Foods, the local grocery co-op, including Maceys, joined in 2010. Last year the Stand to Cure MS generated $10,000 at 60 locations across Utah. 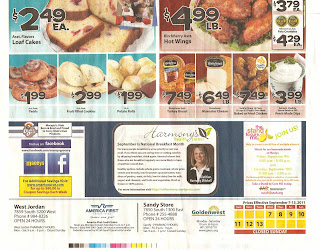 Variations of this fundraiser have been around forever. Back in the day at Children’s Miracle Network we did root beer floats with modest success. Like many such fundraisers much depends on who is staffing the booth. Inside a grocery store lemonade is more often sold rather than bought. (Especially since the lemonade at the MS stand is Country Time. Blech!).

But if you’ve got people full of personality actively drumming up business, this could work just fine.

The fourth effort is from another local grocery chain called Fresh Market and their effort is an old-style vendor program with Kraft and its Huddle to Fight Hunger effort benefiting the anti-hunger charity Feeding America. 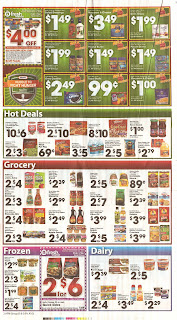 Long-time readers know I’ve got a lot of love for these big involved campaigns. However, I’ve got less love for the way Kraft explains its participation with Feeding America on its Facebook page:

“Kraft will donate up to 4,000,000 meals via online and mobile activities, as part of our goal of providing 25 million meals. The monetary equivalent of meals will be donated. $0.14 equals one meal secured by Feeding America on behalf of local food banks.”

What they’re saying, I think, is that Feeding America and its member food banks are able to provide full meals for relatively little money because of their efficiency in operations and because of the amount of donated food they receive. Donating to Feeding America, therefore, offers a kind of multiplier effect. Kraft has a goal of providing 25 million meals. At $0.14 per meal that equates to a $3.5 million donation.