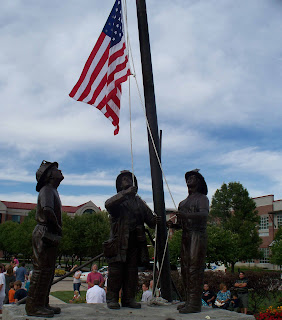 Yesterday was the tenth anniversary of the 9/11 attacks. Like most other Americans, I remember exactly what I was doing when I heard the news; I was having breakfast at Denny’s delivering a cause marketing proposal to a local official of the US Golf Association (USGA).

I have many friends/family in New York and Washington D.C. both who were personally affected by the attacks.

After a paroxysm of watching 9/11 memorials and television specials this last week or so, and reading about the attacks from every possible viewpoint, I've concluded that Americans are still struggling to understand what it all means. Was it just a terrorist attack? A wake-up call? A finger of indictment pointing back at America?

My wife and I have children who were unborn when the attacks took place. And so it falls to us to explain to them what it means us in ways they can fathom. Frankly, we’ve struggled with that.

There are bad people in this world who mean to do harm to other people. That part of the story is easy enough tell. But that chapter doesn’t have much of a moral. And memorial services and commemorations alone don’t settle it either or offer more profound life lessons.

Instead, here’s where my wife and I are coming to, I think.

We live in parlous times. Bad people do bad things to good and bad people alike. And like Irishman Edmund Burke famously said, “all it takes for evil to triumph is for good people to do nothing.” We can and should grieve for those who died, celebrate their lives, keep fresh the memories, and venerate the many who acted so heroically on that day. All are right and proper responses.

But good people must do more.

Tragic moments like the attacks of 9/11, and important anniversaries like yesterday represent inflection points. They remind us that life is short. Times like these are a chance for those of us who remain to look ourselves in the mirror and ask, ‘am I the person I should be?’ And if the reflection in the mirror answers no, then we must make every effort burnish the “better angels of our nature,” as American President Abraham Lincoln so eloquently put it.

My family and I are people of faith. We believe that God would have us love our neighbors as ourselves and that our neighbor is everyone else who draws breath. Like the Sunday School song goes, "all are precious in His sight." But you don’t have to believe in the Decalogue or Jesus or Sunday School songs to draw the same moral conclusions.

What’s the proper way to remember man-made disasters like 9/11 or natural disasters like the earthquakes in Turkey, China, or Japan, or the hurricane in Haiti, or the tsunami in Asia, all of which have taken place since 9/11? By embracing the idea of kaizen. By continuously improving yourself and working to improve our world, too.

One place to start right now is with famine relief in East Africa, where hundreds of thousands of precious lives are currently threatened.