Bringing a Reporter to a Pine Beetle Battle (With Apologies to Dr. Suess) 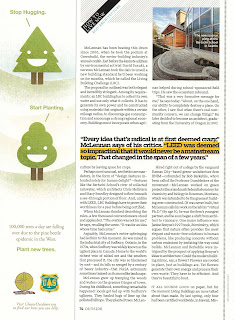 You’ve probably heard the old joke whose punch line talks about “bringing a knife to a gunfight.” The joke is about feckless approaches in hazardous situations.

In the fight to save forests from the ravages of the pine beetle, which has affected at least 2 million acres of conifer forests in the Western United States, the U.S. Forest Service has made a reporter their partner.

Perhaps you’ve seen news reports about the pine beetle epidemic. Here’s a recent one from my local newspaper if you haven’t read about it anywhere else.

It’s a story that hits close to home for me and my family. Many of my in-laws spent their formative years in and around Cedar Mountain in Southern Utah, where the devastation to the conifer forests due to pine beetles is widespread. When my father-in-law surveys the devastation to his boyhood playground, he’s heartbroken.

The U.S. Forest Service ran the ad above in the October issue of Outside magazine. It’s a slightly cheeky ad with a clear call to action: stop hugging trees and start planting them.

That’s something I can personally get behind so I visited chooseoutdoors.org to find out what I can do. What I found was a self described “portal for all things outdoor” and a “news source for recreation information and advocacy.”

There’s not a search feature at chooseoutdoors.org and no specific tab for tree plant initiatives. But there is a tab labeled ‘Initiatives.’ That tab has two listings: “Recommendations for Our President,” and “Testimony on Economic Stimulus’ from the Founder and Senior Advisor to Chooseoutdoors.org, Bruce Ward. So I tried the ‘Get Involved’ tab.

Here’s all the listings under that tab, not including the obligatory ‘make a donation’ ask.

"Help Choose Outdoors sustain the outdoor experience for all Americans.
Introduce someone to outdoor activities."

Chooseoutdoors.org features an interesting and nuanced documentary about the pine beetle epidemic, accounts about consensus being reached at REI store meetings, policy papers, and news accounts. But nothing, that I could find, about planting new trees in forests affected by the pine beetle.

With its emphasis on education, consensus-building and partnerships Chooseoutdoors.org may have the best approach for the pine beetle devastation. I don’t know. But I do know that this ad is selling something that Chooseoutdoors.org isn’t delivering.