A Model Cause Marketing Tactic You Could Use in Your Campaign 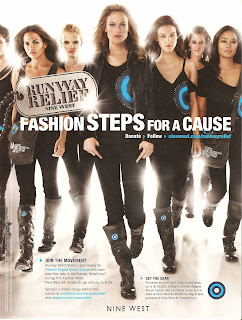 Nine West, the women’s shoe maker and Modelinia.com, the website for all things model, want you to sponsor one of the models in the ad at the left to benefit Fashion Targets Breast Cancer (FTBC) as a part of the cause promotion called Runway Relief.

In their Nine West boots are FitBit wireless pedometers measuring the mileage the girls cover during Fashion Week. When the week is up, Nine West will donate $1 for each mile walked in the boots up to $75,000.

In addition Nine West is also selling the totes, the tank tops and, naturellement, the boots featured in the ad to benefit FTBC.

It took me a good 15 minutes to find the model sponsorship page and once I found it the interface seemed calculated to keep you from actually participating. You have follow one link to a gallery of the participating models. When you click on a favorite model you are then taken to a third-party site to donate. Once there you must type in the model’s first and last name and pay via PayPal. I hope everyone with a mind to donate is as diligent as I was.

But never mind all that. What Nine West has done here is pure cause marketing genius. The models know the pedometers are there, of course, so they’re more likely to wear the boots when they're off the runway during the all-important Fashion Week. Boots are normally rather anonymous, so these from Nine West have a metal tag that dangles from them that explains that they are part of Runway Relief. And, of course, there's that huge target symbol on them.

I think some variation on this would work great with local-market celebrities. Habitat for Humanity could attach a pedometer to the arm of a local pro sports player who is being sponsored for each swing of the hammer or swipe of the paint brush. Charities with walk or race events could put pedometers on the TV news anchors who race... or don't... and sell sponsorships. Same with morning zoo jocks from the local radio station. You could pit station against station in a contest to see who accumulates the most steps or miles.

I’d also add in some kind of element that let people who donated the most do some kind of meet and greet with the celebrity. And, I’d consider publishing the results for each local participating celebrity. It’s risky, but I think it would pay off.

Would the celebrities walk harder or longer knowing that their every step or every brush stroke generates a donation?