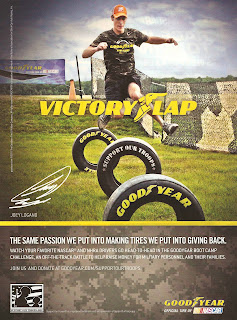 On Sunday, Sept 18, 2011 the Goodyear tires on cars racing at the NASCAR Geico 400 and O'Reilly Auto Parts NHRA National Top Fuel and Funny Car races featured a show of support for the troops and will benefit the nonprofit charity called Support Our Troops.

The tires, which sported a custom Support Our Troops graphic on the sidewalls, have now been pulled from the cars and will be autographed by their respective drivers and auctioned off online to support the cause.

This is the second year that Goodyear has conducted this campaign.

But for 2011 the company has added some new elements. Goodyear’s website asks you to donate directly via the site or by text-to-donate. The text-to-donate option generates a $10 donation by adding that amount to your mobile phone bill. Goodyear also invites customers to donate all or part of their rebate when they purchase tires during Goodyear's 'Traction in Action Tire Sale.’

Lastly, Goodyear has also developed an event that shows promise, even if it looks under-developed right now to me. Called the Goodyear Bootcamp Challenge, the contest pits drivers from NASCAR vs. drivers from the NHRA in a physical contest that uses Goodyear racing tires. Goodyear is the official tire provider from both NASCAR and the NHRA.

I say it shows promise because much depends on how well the event is executed. It appears that the Bootcamp Challenge has already taken place, although the website and the promotional video are vague on that point. But the website does describe six stations in the Challenge: Spin and Run; Tire Slalom, Sergeant Slide; Leapfrog; Find the Key; and, Water Balloon Toss.

Based only on those names it sounds like a snoozefest. Too often the thinking that frames fundraising events is based on what could be easily/quickly put together, rather then what 'customers'...whatever that means to you... would want to see or participate in.

Here’s what I suggest to augment the Challenge for 2012.

NASCAR does a lot of direct-to-fan outreach, making their athletes much more accessible than NFL, NBA or MLB players. It’s a great point of differentiation. As a starting point, Goodyear ought to auction off the right to participate in next year’s Challenge with a favored driver to the highest bidders.

People pay good money to watch NASCAR and NHRA drivers drive. But how much of what NASCAR driver Joey Lugano (seen in the ad at left) or NHRA driver Tony Shumacher is all-purpose skill and how much is vehicle specific skill?

So imagine them driving something besides their usual vehicles; golf carts, lawn mowers, Cushmans, race prepared electric kiddie cars, horse and buggies, bikes, swamp buggies, snowmobiles, etc. It would be like a decathlon where athletes are rewarded not for being the 'world’s fastest human'…in the Olympics that title belongs to super-sprinter Usain Bolt. Instead, champion decathletes are considered “The World’s Greatest Athletes.”

In a like manner Goodyear could crown “The World’s Greatest Driver!” in benefit of Support Our Troops.

That I would watch.