The American Red Cross Deserves Better Cause Marketing Creative Than This 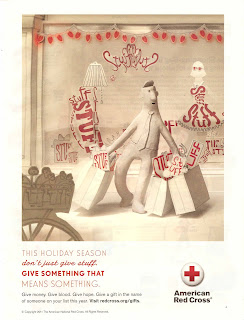 At Causemarketing.biz I often review elements of cause marketing campaigns but I generally shy away from reviewing creative.

That's because I don’t have a hardcore agency creative background. So it’s hard to trot out those kind of credentials, as in, ‘Back when I was at Crispin + Porter, Alex Bogusky used to say it was OK to try something different so long as it didn’t look like a mistake.’*

With those confessions out of the way, the creative for the American Red Cross series looks like a mistake to me.

The ads are meant to drive you to redcross.org/gifts, where you can pledge donations in various amounts to support the Red Cross’s vital mission, or to get you to donate blood. (Let me say that regardless of my criticisms of the ads, the American Red Cross is an vitally important cause that deserves your support.)

The creative features a clay everyman with several other 3-D objects set against 2-D drawings in the foreground and/or background.

The copy of the first ad at the left tells me that the ad agency that developed it did their homework. It says:
“This Holiday Season don’t just give stuff. Give something that means something.”

How often I’ve had that very conversation with all kinds of different people. Unless you’re going to give me tickets this Christmas to the opening ceremonies of the 2012 London Olympics or a super-thin new Piaget Altiplano watch (if Santa’s reading, I’d be happy to get Altiplano tank watch in yellow gold, thank you very much), chances are I’ve already got something like what you have in mind that is perfectly serviceable. 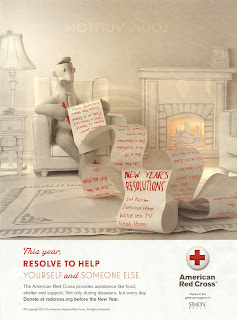 Consequently, I don’t need more stuff. Most of the people I talk to on the subject say much the same.

But the art part of the creative leaves me cold. I don’t like the off-white color of the ads. I don’t like how bow-legged the clay figure is. I loathe how indistinct his features are and how his hair seems to be opening like a fish’s gill opens to oxygen in the water.

It's all just so dreary and drab that I think Alex Bogusky would say it looks like a mistake.*