Made in America Cause Marketing

While that sinks in a little consider that Liberty also has a strong cause marketing component with its partner Big City Mountaineers (BCM), a Denver nonprofit that gives urban kids a wilderness experience that often proves to be life-changing.

The night before my interview with Alex Strickland of Liberty at the 2012 Outdoor Retailer trade show in Salt Lake City the company hosted a beer bash that raised $2000 for BCM.

During the Summer Outdoor Retailer show in August 2011, Liberty released a bottle featuring BCM's logo which benefited the nonprofit. This year the BCM benefit bottle (at left) was designed by Yakima graffiti artist Bernardo Boeragor.

Liberty pledges to do a new benefit bottle for BCM every year. 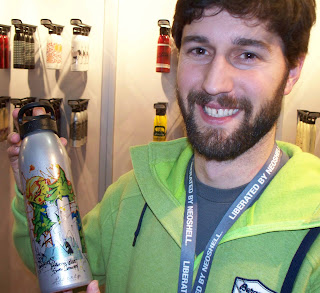 The company also produces a series of bottles imprinted with topographic maps. For each topo bottle sold, Liberty gives 1% of the profits to the Conservation Alliance.

Art and design is a big part of the appeal of the Liberty bottles. And because the company has a proprietary printing process that allows it print directly on the bottle, they can do designs no one else can. Boeragor's BCM bottle, for instance, has a cool raised texture that’s eye-catching and impossible not to touch.

Smart design. Cool art. A strong desire to help causes and Made in America of recycled materials. Liberty Bottleworks gets it.