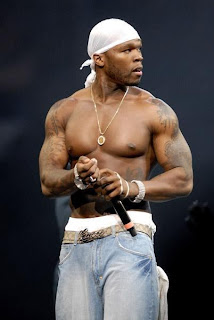 Curtis Jackson, aka rapper 50 Cent visited the horn of Africa in September 2011 hosted by the United Nations and committed to provide 1 billion meals to the World Food Programme over the next five years, funded in part by several cause marketing efforts.

The Horn of Africa has a lot of problems right now, nonetheleast of which is that starvation there is rampant, long-term drought is endemic, and working institutions are few.

Since the UN's World Food Programme can manage to deliver a meal for about $0.10, Jackson has basically committed to donating $100 million (or 200 million 50 cent pieces). That's a very big number.

He gave his commitment a kick start with a donation of $350,000. Like him on Facebook, and when he reaches 1 million new likes, he’ll donate another $1 million.

50 Cent is also tying the sales of his Street King energy drink to the World Food Progamme (WFP). For every bottle sold, 50 Cent will donate one meal.

Street King competes with 5-Hour Energy Drink, a caffeine and B-vitamin concoction, which is nearly ubiquitous on store counters nationwide in the United States. But ubiquity doesn’t come easy or cheap.

The cause marketing baked into Street King coupled with 50 Cent’s celebrity is a way to help break through the clutter and grease the always-challenging distribution channels.

50 Cent brings not only celebrity and cause marketing juice to Street King, but direct sales experience. He grew up on the street in Queens, New York and was selling drugs at age 12 after his mother was murdered.

Later, after his rap career had skyrocketed, he worked with Glaceau to create the vitamin water drink called Formula 50. When Coke bought Glaceau for $4.1 billion in 2007, Forbes estimated that 50 Cent’s after-taxes take was $100 million.

He teamed up with Right Guard to produce Pure 50 RGX Body Spray. He also has cause marketing bona fides. His condom line was started with the intent to donate proceeds to HIV awareness.

But for all his business acumen and rags to riches success, 50 Cent is also a lightning rod. He’s a convicted felon who’s served time. He’s said to have ongoing ties to organized crime and he’s been involved in more lawsuits and legal disputes than Lindsay Lohan’s entire legal team.

In short, he’s an interesting choice for a partner of the World Food Programme. And when I say interesting I don’t necessarily mean that as a code word for bad.

Rather, 50 Cent is a complex and accomplished man with a checkered past. Jackson picked the name 50 Cent as his nom de rapper, he says, because it means 'change.'

I genuinely hope he reaches his fundraising goal for the WFP.