Fictional Cause Marketing From DC and Time Warner 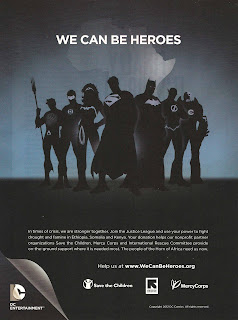 For the next two years, says the press release, Time Warner Entertainment and Time Warner businesses will be supporting the work of the International Rescue Committee, Save the Children and Mercy Corps in the horn of Africa, which is in the throes of a deadly drought made worse by wholesale political instability in Somalia in particular.

Time Warner also sells T-shirts, mugs, i-Phone cases and stainless steel water bottles emblazoned with the silhouette of the Justice League superheroes in front of an outline of the African continent. Fifty percent of the purchase price of the merchandise goes to the cause.

This is where I say something really catty like Time Warner cares so much about the tragedy in Somalia that it’s sending the crème de le crème of its stable of fictional characters. Apparently other beloved Time-Warner fictional characters like Elmer Fudd and Foghorn Leghorn didn’t test as well with audiences as did Cyborg.

Now I know that the Superman and Batman franchises are worth hundreds of millions to Time Warner and in putting these characters behind this cause, the company is showing real commitment.

But, seriously, the fictional Justice League supporting the all-too-real need in the Horn of Africa? It’s worse than a non-sequitur. It’s insulting.

Time Warner has taken on causes in a very public way before. The company sent reporters from Fortune, Money, Essence, and Sports Illustrated to Detroit for year-long in-depth coverage of that troubled city from every possible angle. Called Assignment Detroit, Time Warner even bought a house in Detroit for its reporters to crash at.

I think it’s fair to say that if Time Warner sent a phalanx of reporters to Somalia and the refugee camps in Kenya to undertake blanket coverage for a year, that progress would be made in the Horn of Africa.

Or, if Time Warner is super-attached to the DC Entertainment angle how about of the company donates a 1 percent share of total gross generated by Christopher Nolan’s new Batman pic, the Dark Knight Rises, set to release this Summer? If that movie follows form, such a donation would be worth a cool $10 million.

Gregory Hansell said…
I actually have a WeCanBeHeroes mug on my desk and donated in addition to that to the cause. I felt the video and the concept generally were powerful and effective, very far from insulting. The campaign is aimed at a younger generation - the people who are currently reading comics, by and large - and that's who is going to respond to a campaign like this.
2/01/2012 3:05 PM