Using Earned, Owned and Bought Media to Activate Cause Marketing 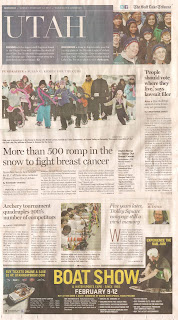 Leading up to its Feb. 11, 2012 Romp to Stomp tour event in Utah, Tubbs Snowshoes bought local advertising. The day after the event, it garnered some earned media, in this case a story in one of the Salt Lake City dailies.

Both earned and bought media represent ways for a sponsor to activate or promote their cause marketing relationships. A third category, called owned media, is what General Mills has with its millions of box tops. Or what you have with your Facebook page and Twitter feed.

So how do they differ? And which is best for cause marketing?

As I’ve noted before, basically all cause marketing has a PR component whether or not there’s also any bought or owned media.

And even in a digital age where newspapers in North America are basically ‘old media,’ getting a story in the paper nonetheless brings with it a measure of credibility that owned and bought media don’t have.

That’s because when someone publishes or broadcasts a story about your cause marketing they are giving a kind of implied endorsement. Because you can’t really buy TV or newspaper coverage in the United States, it’s seen as more trustworthy.

Tubbs, the sponsor of Romp to Stomp, is half-glad to get this coverage (I looked, but it appears than none of the four TV stations in the Salt Lake City market covered the event).

Tubbs is glad to get the coverage and the implied endorsement. Salt Lake City has easy access to the great outdoors. So getting its name mentioned in a positive light among the very people who could use snowshoes is beneficial.

But Romp to Stomp is an event; a virtual live commercial for its products. Romp to Stomp benefits Susan G. Komen for the Cure in the United States. And quite naturally Tubbs wants people to come to the event both to test its snowshoes and generate money for Komen.

Because TV and newspaper coverage depends on the whim of producers, editors, and reporters, Tubbs covered its best by buying ads in both local and national publications. The ad at the left was in a local outdoor sports journal.

The good news is that as long is your credit is good and space is available, you can buy electronic and print advertising. The bad news is that ads depend on capturing people’s attention. And who among us hasn’t skipped through TV ads thanks to DVRs, or blown past pages of advertising in print and online?

So which is best for activating your cause marketing?

The answer is, it depends.

Heinz uses earned and owned (ie, packaging) media almost exclusively for its cause marketing efforts, and does so effectively. 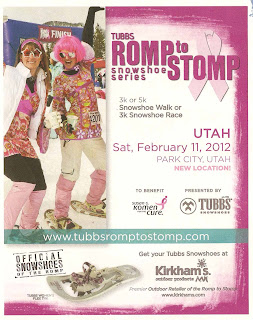 But RED really needs at least some bought media (some paid for by sponsors) to make its branding approach work.

One final anecdote: 10 years ago this month the Winter Olympics were held in Utah. My brother-in-law watched news and sports coverage of the curling events and became interested. After the Olympics were over, he picked up the sport.

I think it’s far to say that no amount of advertising that curling suppliers could have done for brooms, stones, shoes and sweaters would have compelled him to try the game some call ‘chess on ice.’

So in Tubbs’ case wherein part of their marketing goals has to include getting more people to try snowshoeing, earned media with its longer form and concentration on narrative, is probably more valuable.