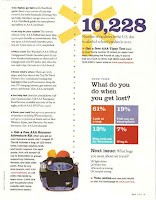 In this instance, AAA of Northern California, an auto club that also includes the states of Nevada and Utah, wants their members to see how competitive their auto insurance rates are. And the offer is almost ripped from the headlines of today’s news.

When you call for an auto insurance quote, AAA of Northern California will make a $5 donation to unnamed groups that support state parks in California, Nevada, and Utah, up to a total of $100,000.

Although all three states are facing budgetary pressures in the downturn, the Golden State has been especially hard hit. California has plans to shutter as many as 70 of the state’s 279 state parks on July 1, 2012.

Aside from the timeliness, this cause marketing promotion is an especially close fit between AAA and the cause. Members of auto clubs, it goes almost without saying, have automobiles. And in the American West an automobile is almost the only way to get to many state parks. That Mars-scape to the left is Goblin Valley State Park in my home state of Utah and there is no town with more than 50,000 residents closer than 250 miles from the park.

To give you an idea of how remote that is, if you put a pin in a map where New York City is and strung out a piece of yarn from the pin that represented a 250 mile-radius, that radius would take in all of the Tri-State area, Philadelphia, Washington, D.C., Boston, and Baltimore. Tens of million of people live within that 250-mile radius.

There’s a few state parks in Nevada that are even further still from any city of consequence than Goblin Valley State Park is.