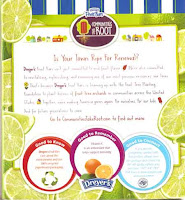 Communities Take Root is an effort from Dreyer’s Fruit Bars brand, started in 2010, that plants fruit tree orchards in deserving neighborhoods across the country.

Dreyer’s, owned by Swiss food giant Nestle, partners with the Fruit Tree Planting Foundation to fulfill the backend of the promotion. There’s a nomination procedure at www.communitiestakeroot.com. Nominated communities then seek votes online at the same website. Top vote getters receive a fruit orchard planted by locals with the Tree Planting Foundation’s help and advice.

The promotion is activated via PR and on Dreyer’s packaging (see at left). The YouTube video that explains the promotion has a scant 383 views, two of them mine, since it was posted back on Feb. 21, 2011.

I have just enough Jeffersonian Ideal of a Democratic agrarianism in me to admire and appreciate when the American economy was based mainly on agriculture that one of the first things settlers would do was plant a fruit tree orchard. Even today, there are wide swaths of Phoenix, Arizona, my hometown, where you can walk up to orange or grapefruit tree planted in the lawn strip between the sidewalk and the street and grab some citrus. So I love the idea of this promotion.

In the video, Dreyer’s promises long-term support. And why wouldn’t they? Fruit trees just aren’t that expensive. In fact, even communities that don’t win a full orchard nonetheless get three starter fruit trees with instructions on how to plant them.

But to me this promotion seems to have missed some tricks, reflected in part by the 383 viewings the explanatory video has on YouTube.

First off, I wondered why Dreyer’s went to the expense to build a separate website. This kind of promotion is tailor-made for Facebook Oh, I know that Facebook isn’t without its challenges and difficulties. But they’re more than made up for that by the ease with which Facebook allows participating communities to spread the word.

Secondly, I found the website more vague than it needed to be on the issue of whether the contest was still active. In fact, Communities Take Root approves communities in tranches and 2012 has more than one tranche of winners. But on the home page there are two side-by-side buttons that respectively read ‘Vote Now’ and ‘See the Winners.’

Having waves of winners is the right approach. But since most such contests are winner-take-all, the buttons confused me at first.