Cause Marketing on the Navajo Reservation 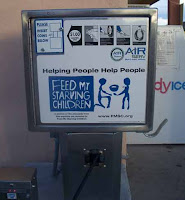 If you’re like me, you loathe it when gas stations sell air for your vehicle’s tires. Air is free, right?

But I saw a pay air pump on the Navajo Indian Reservation that used cause marketing to take some of the sting out of buying compressed air.

Gap, Arizona is a tiny burg on US-89 on the western edge of the expansive Navajo Nation (the reservation is slightly larger than the state of West Virginia).

The population density of the Navajo Nation is very low, and the unemployment and poverty rates are high; 42 percent and 43 percent respectively. For comparison’s sake, the unemployment rate on the adjacent Hopi reservation is 55 percent. But the Navajo have a rich and amazing artistic heritage. Years ago I worked in an office where my desk faced a cool RC Gorman painting. Would that I could have bought it.

The Hopi have spiritual and religious traditions that have fascinated scholars for decades. The Hopi have continuously occupied some of their sacred mesas since 1,100 AD. And anyone who can make a rewarding and fulfilling life on the high and austere desert mesas of Northeast Arizona has my complete respect.

Here’s how the promotion works: when you buy one-dollar’s worth of air, Air Serv will donate an undisclosed amount to Feed My Starving Children. Nothing on the pump or on FMSC’s website told me that some of the children were on the Navajo Nation, but I found it impossible not to make that leap in thinking. FMSC does indeed send some food Stateside and the Navajo Nation, with its very young and poor population, is seemingly a likely recipient.

Air Serv, which owns and services the equipment, uses their relationship with FMSC as a way to differentiate itself from competitors. It’s like those vending machines that promise to give a portion of the proceeds to a cause. Air Serv’s total commitment to FMSC is $100,000 a year for five years. Not bad.

The promotion works because FMSC’s name says what it does. And it worked in Gap, Arizona for me because I needed air for my tires and because I couldn’t NOT think of Navajo kids as possible recipients.