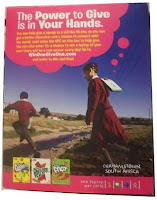 General Mills is back with it’s Win One Give One promotion, “with,” as I wrote about the promotion back on May 18, 2011, “the item in question being a XO laptop computer.”

This post is part of an occasional series whereby I take a second look at notable cause marketing promotions. Here’s what I wrote back then:


“Inside specially-marked packages of 6 varieties of Fruit Rollups are certificates for a free XO computer. A total of 2001 XO computers will be given away in the sweepstakes. A matching number will be donated to children in Africa.

“From December 1, 2010 through May 31, 2011, General Mills will also donate one dollar to One Laptop Per Child, the nonprofit organization behind the XO, for every Fruit Rollup coupon redeemed up to $4,000.

“Winonegiveone.com, the promotion’s website, offers a third way for laptops to be donated to Africa. The site, which is targeted to kids and moms has a kind of Angry Birds-type game that allows you to propel a heroic action figure to Africa via a rocket, a catapult or a slingshot. For every 400 heroes that land in Africa, General Mills donates additional laptops up to 442 total. When I landed one on the continent the counter said that 160630 heroes had been sent so far, 90 percent of the goal.

“Once in Africa you can explore a kind of digital diorama of Grahamstown, based on the actual city of 125,000 in the Eastern Cape of South Africa. There are more games, short videos, and easy-to-swallow didactic content. I learned, for instance, that South Africa has three capital cities and 11 official languages!” 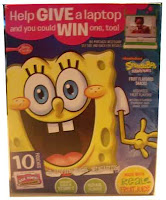 For 2012, General Mills has simplified the promotion and the website. This time the diorama is of a village in Rwanda and the featured child is a boy named ‘Jean-Luc.’ Instead of all the complications with the game, the promotion is more straightforward: for every 100 UPCs from specially-marked packages of fruit snack and redeemed online, General Mills will donate one XO laptop to Africa.

As before, when you enter the code, you also enter to win your own XO laptop

There’s still a game you can play with your mouse; shooting soccer balls past Jean-Luc, who is portrayed as the keeper. It’s not as fun as the ‘heroes’ game from last year. But the whole idea of heroes parachuting in to save the kids of Grahamstown had the thin veneer of ‘bwana’ saving the locals; it was rather patronizing.

Given that General Mills is on its second year, it would be great to get a little follow-up about how the laptops are helping the kids in South Africa and how many were actually donated.

Too few companies, even sophisticated cause marketers like General Mills do as much follow up as they should.