Gambling With Your Pink Ribbon Cause Marketing 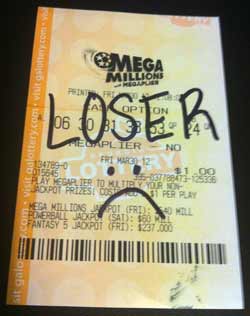 It’s older than bingo in the basement of the local parish and, if you get the offer right, an all-but-certain money raiser. Except that adding gambling to your pink ribbon cause marketing promotion is also almost certainly a mistake.

This post was prompted by a raffle… the mildest of games of chance… that took place at Longevity Pilates in Verona, New Jersey. Raffle tickets were $2… six tickets for $10…and the prize was 1 private session or three group classes with the studio’s Pilates teacher of choice. Proceeds went to the Breast Cancer Research Foundation. The campaign was conducted in tribute to Nancy Contey, the daughter of a longstanding Longevity Pilates client who had lost her fight with breast cancer at age 46.

How is any of this a mistake, you ask? Well, let’s start with some definitions courtesy of Wikipedia:


“A game of chance is a game whose outcome is strongly influenced by some randomizing device, and upon which contestants may or may not wager money or anything of monetary value. Common devices used include dice, spinning tops, playing cards, roulette wheels or numbered balls drawn from a container. A game of chance may have some skill element to it, however, chance generally plays a greater role in determining the outcome than skill. A game of skill, on the other hand, also has an element of chance, but with skill playing a greater role in determining the outcome.”

“Any game of chance that involves anything of monetary value is gambling.”

So, because the Pilates lessons have a monetary value the campaign represents a form of gambling. In my state bingo and raffles like this one are illegal, even for charities.

Fine for me and my state, you say, but a promotion like this would be super-easy to trigger at the local level where it is legal and probably effective.

Nonetheless, there are reasons not to.

We all know the downsides of gambling for individuals; financial insecurity, legal troubles, employment difficulties, even a higher risk for suicide.

For society as a whole the negatives are equally pronounced; political corruption tends to dog gambling wherever it is active, the number of ‘pathological’ gamblers increases wherever gambling takes hold, and, notwithstanding the promises going in about the use of gambling revenue, there’s currently a strong correlation between state budget deficits and states that have casinos, notably Illinois, California, New York, Pennsylvania, and Nevada.

But there are risks for brands, too. Gambling… even in mild forms… represents taking without giving real value in return. And if you sell a product or provide a service for a fee, you can hardly want to encourage that kind of thinking. Even a state lottery tells people that that they don’t have work hard, be thrifty, or improve themselves. They just have to pick the right numbers. The addition of the cause tends to take the sting out of gambling. But, of course, it is still gambling. Warren Buffet calls Gambling is a “tax on ignorance,” because only the ‘house’ reliably wins. For these reasons you hardly ever see mainstream companies actively co-brand with gambling companies. To do so would be hazardous to the mainstream brand.

Then there is this. Did they participate in your cause marketing campaign because of the cause or because of the game of chance? If you don’t know which, how do you improve the effort for the next time?

I actively discourage you from using gambling in your cause marketing efforts.