How to Know It’s Time to Fire Your PR Group 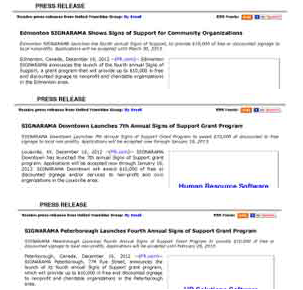 The most common way to activate or promote your cause marketing campaign is via public relations. If your firm has complications like multiple locations doing the same cause marketing promotion at the same time then your PR crew has a responsibility to step up their game.

Here’s what happened instead from the franchisor of SIGNARAMA, the world’s largest sign franchise with nearly 900 locations in 50 countries. Some number of SIGNARAMA stores do a cause marketing style promotion called Signs of Support whereby they make in-kind donations worth as much as $10,000 to local causes in their service area.

So how does SIGNARAMA corporate parent activate this effort? With the same press release in each market, released on the same date over the same PR wire.

At left is proof. There are three press releases for SIGNARAMA stores in Edmonton, Alberta, Peterborough, Ontario, and Louisville, Kentucky all with exactly the same leads or first paragraphs. They differ in the second paragraph, but the format is virtually the same.

I get press releases from this wire service as a RSS feed. The keyword for my feed is, naturally, ‘cause marketing.’ And I got more of this same release than just these three. Anyone else searching on ‘cause marketing’ got the same fat batch of releases on Dec. 16, 2012.

What the United Franchise Group, SIGNARAMA’s parent, has done here is an efficient way to activate a cause marketing effort. But effective? I don't think so.