Cause Marketing to Build Customer Loyalty 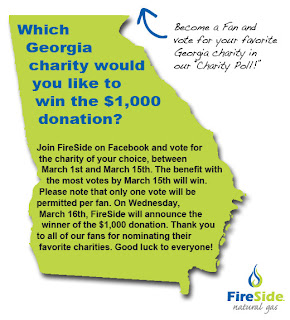 Suppose you face a fiercely competitive consumer-facing marketplace that was once a served by a regulated monopoly. How would you compete?

In the deregulated Georgia natural gas market, one company is using cause marketing.

My many astute readers are probably asking where the money comes from for the marketers to be so aggressive. The answer is that there’s a monthly access fee of about $45 apart from the cost of gas.

To this outsider it doesn’t look very different than the satellite TV market, which is delivered by Dish and DirectTV, but sold by numerous independent local marketers.

That kind of competition can be a kind of a merry-go-round. The customers churn a lot. They chase bargains. They’re literally being paid not to be loyal.

One of these Georgia gas marketers… Fireside Natural Gas… is trying to get off the merry-go-round with a cause marketing approach. From February 21 to February 28, 2011, Firesides’ Facebook page accepted nominations for one charity to receive $1,000 donation. From March 1 to March 15, 2011, Fireside wants you to friend them and vote on one the nominees.

I like the idea of Fireside using cause marketing to build loyalty. But there’s almost nothing in the way they’ve approached it that’s likely to build loyalty, including the paltry donation amount.

My hope is that Fireside will keep at it long enough to either figure out a more effective approach, or that they hire some professional help.

FireSide Natural Gas said…
I appreciate Kate’s analysis of FireSide’s cause marketing effort. As the President and Owner of FireSide Natural Gas, I’d like to make a few comments. First of all, there are nine (not eleven) marketers in the market. The other two (along with many others) left Georgia long ago. Secondly, the most aggressive “churn” gas marketers in Georgia are also the ones with the most customers (FireSide is the smallest marketer in Georgia). By the way, the largest marketers in Georgia also have a long history of reporting the most expensive natural gas prices to the Georgia Public Service Commission. Additionally, it’s not the “access fee”, as Kate suggests, that creates the dollars for the aggressive “churn” campaigns. It’s the higher margins from higher gas prices that pays for it all.

Most importantly, FireSide has engaged in cause marketing because we feel great about giving back to the Georgia communities that we serve. FireSide has put no internal value on building any loyalty through this effort and may choose to give away more in a later campaign depending on the feedback from our fans. We have a very loyal customer base with virtually no churn because we consistently have the lowest natural gas price each and every month. We also send an accurate invoice and answer the phone very quickly when a customer calls. I can’t think of a better way to build loyalty because I have found over the years, low pricing and excellent customer service is what customers really want.

We chose this particular cause marketing effort to introduce ourselves to anyone who feels that it’s important for a company to give back. It has nothing to do with loyalty. In a best case scenario, a prospective customer might take the time to get to know us and potentially want to do business with us and a charity gets a thousand bucks. In a worst case scenario, a charity gets a thousand bucks and maybe Fireside will be seen as a company that cares. Either way, everyone wins. Isn’t that the true definition of cause marketing?

Thanks for your comments. The post and the analysis was all mine. Kate lives in the market and she merely introduced me to the campaign.

Glad to get corrected on the number of gas marketers.

I'm surprised to hear that it's not the access fees (or whatever they're called since you put the phrase in quotation marks) that generate the margin for the marketing. But you're looking at the earnings spreadsheet and I'm not, so I'll defer to you.

I'm glad that you chose cause marketing. But there's nothing wrong with having a business goal behind it, whether it's customer loyalty or something else.